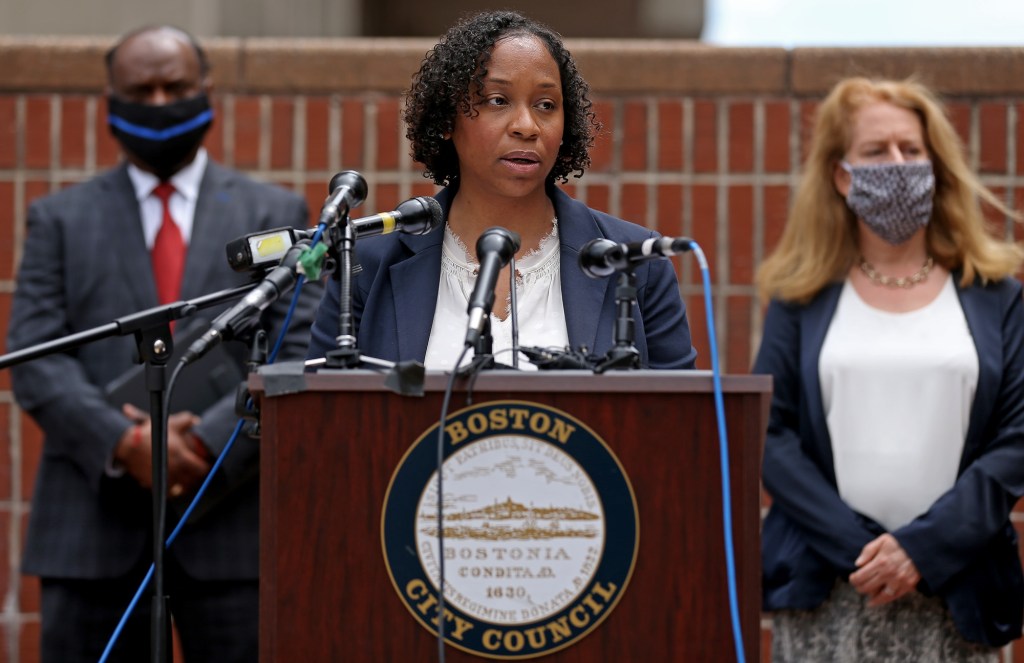 City Councilor Andrea Campbell announced she is jumping into the race for Boston mayor, becoming the second potentially strong city councilor to begin a run.

“In this profound moment of reckoning for our country and our city, as people rise up to demand change, Boston needs leadership that not only understands, but has lived the systemic inequities facing our residents every day,” Campbell said in her announcement.  “I’m running for Mayor to be that leader, to bring our city together to confront inequities head-on, and finally make Boston a City that works for everyone.”

Campbell, whose district includes Mattapan, Dorchester and parts of Roslindale and Jamaica Plain, was elected in 2015 and, in 2018, was the first Black woman to serve as the council’s president. She attended Princeton University and served as deputy legal counsel to former Gov. Deval Patrick.

Campbell leapt into the race nine days after at-large Councilor Michelle Wu announced her own run. Mayor Martin Walsh, the incumbent, hasn’t said whether he’ll seek a third term, but has acknowledged calling politicians to firm up support after Wu let him know she was running.

Both Wu and Campbell for months have been seen as some of the strongest likely opponents for Walsh.

Campbell, currently the council’s public safety chair, faces the potential disadvantage of never having run citywide before, unlike Wu. But the Roxbury native’s advantage over Wu is that she’s originally from Boston, unlike the Chicagoan Wu.

My entire life has been connected to and shaped by this city.

Now, I’m running for mayor of Boston because every neighborhood deserves real change and a real chance.

Boston has never had anyone other than a white man as mayor, so either Campbell or Wu would represent significant change for the majority-minority city.

There’s also speculation that Walsh could depart from his seat for a Cabinet post if his friend Joe Biden wins the presidency in November, which would likely create a wide-open race for the big office on City Hall’s fifth floor.

Walsh, if he runs, would be formidable, with a war chest of well over $5 million, near-universal name recognition and the huge organizational structure the former union boss’s labor support affords him. The mayor also is popular, with multiple polls — including the most recent by GBH — showing Bostonians giving him high marks, particularly for his response to the coronavirus pandemic.

Campbell had $285,000 on hand at the start of September, according to state data.

She made headlines last year with her push for a city inspector general, which she said would have improved transparency and cut down on corruption. This year, she — and Wu, plus four others — voted against the mayor’s proposed budget as they sought deeper cuts to the police budget and more money toward social programs.

Campbell pointed to her background in the city and her family experience as part of the fabric of her campaign.

She is a twin, and her brother Andre died at age 29 while awaiting a trial after cycling in and out of the criminal justice system from a young age.

“How can two twins born and raised in Boston have such different life outcomes,” she asked in her campaign announcement.

“Boston is where I was born and raised; where I went to five excellent Boston Public Schools, where I started my career in Roxbury, and started my own family in Mattapan; and where I have proudly served my community of District 4 for the past five years. But it’s also where I’ve suffered tremendous pain and loss, and experienced how Boston is a city divided by access to opportunity,” she said.

“But I also know what is possible in Boston, because, by the Grace of God and the opportunities this City afforded me, I stand here today — as a girl who grew up in public housing in Roxbury and the South End, with a family torn apart by incarceration and loss, who could be elected the first Black woman President of the Boston City Council, and today launch a campaign to be the first Black mayor and first woman mayor of the City of Boston,” she added.