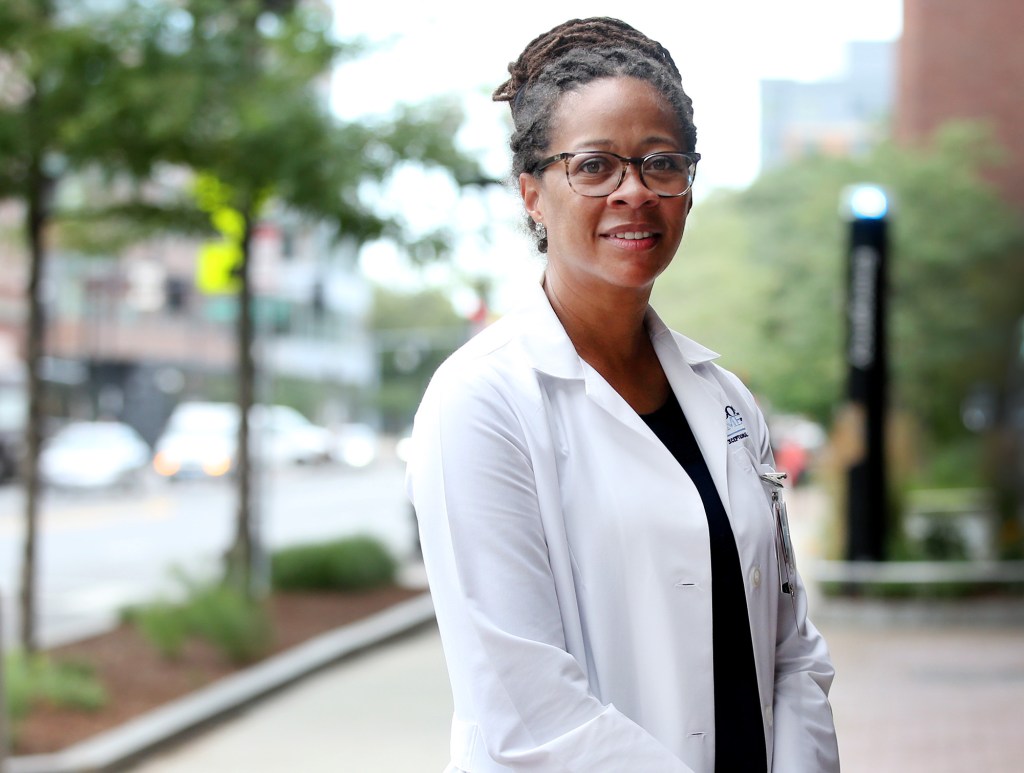 The Bay State is full of valiant health-care workers — and one, who faced fears of COVID-19 at home and in her busy emergency department, is being recognized as one of the nation’s “hospital heroes” in a list alongside the likes of Dr. Anthony Fauci.

That’s Dr. Vonzella Bryant of Boston Medical Center, who earned a spot on the U.S. News & World Report list of “hospital heroes.” She told the Herald this week that connecting with her patients is the best part of the job, and what she relies on to push through the pandemic.

“I just feel like you’re there for all comers in the emergency department, and that’s what keeps me going in emergency medicine, just being there for my patients and then also being there emotionally,” Bryant said.

Bryant said she and her colleagues had watched the coronavirus whip around the world and knew it was set to slam Boston.

“In the ED we were super nervous from what we were seeing and what we were reading, but we were getting ourselves ready — we had weekly department meetings,” Bryant said.

She took on an influx of sick patients, some with very low oxygen levels, while balancing her role at home as a wife, a daughter and mother to two young children.

“The concern of bringing it to my family was there,” said Bryant, adding that her mother came down with COVID-like symptoms in February after a trip abroad but was never tested.

Bryant was named a “hospital hero,” a designation given by U.S. News to honor “countless unsung heroes who are stepping up — often at great personal risk — to keep patients alive and communities safe from COVID-19.”

Her name is among more than 65 hospital heroes in the nation, including the country’s top infectious-disease doctor, Dr. Anthony Fauci, and CNN’s Dr. Sanjay Gupta, who were also awarded spots on the U.S. News list.

Bryant, 46, is the only doctor in Massachusetts to have made the “hospital heroes list.” Heroes can be nominated to the U.S. News editorial team and Bryant said she didn’t even know she had been nominated until she was selected.

“It’s crazy, it’s so crazy. Me? I’m just a girl from Kansas,” said Bryant with a laugh. Now removed from Kansas, Bryant lives in Brookline Village and has been an attending physician in Massachusetts for 16 years.

Quoting the Pulitzer Prize-winning hip-hop musical Hamilton, Bryant said she is someone who “always wants to be in the room where it happens.”

Bryant, who works at Boston University teaching medical students who haven’t been allowed in the hospital since the pandemic, said she also loves her role as an educator.

“I’m just a hopeful person, I’m always a hopeful person and to tell you the truth, working with a medical school keeps me going to work with the young people,” said Bryant.

Bryant is teaching her students what it means to work with a diverse, vulnerable patient population and also works to increase diversity in the medical community.

“Studies have shown that increasing diversity in medicine can definitely help with medical compliance,” said Bryant, adding that having more doctors of color can decrease patient anxiety.

“I really hope that there will be an investment in Black lives,” said Bryant, noting supports such as education, housing and mental health care.

Bryant said she is proud of Boston Medical Center, the city of Boston and Massachusetts in general on how COVID has been handled.

“You just do what you got to do. There’s opportunity there where I feel like I can make differences,” Bryant said.