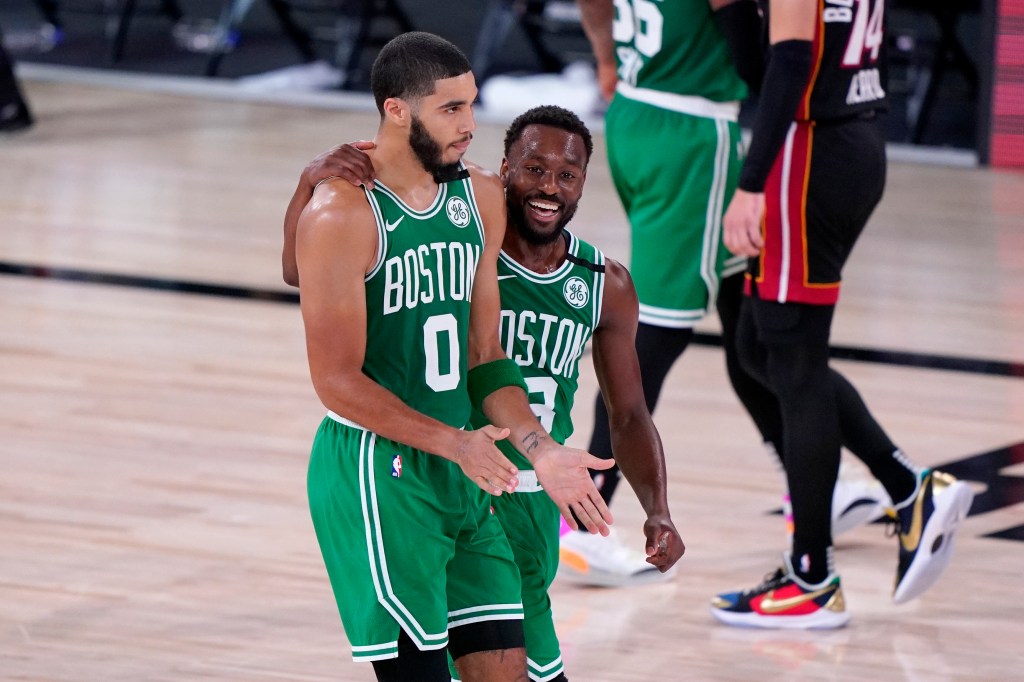 These are odd times in the bubble, with only four teams left in the Disney/ESPN sports complex.

There’s still a lot of randomized entertainment, with Marcus Smart winning his Greco-Roman poolside match against Enes Kanter, and at least twice tossing his more colossal teammate into the pool. In the background, Deuce Tatum was helped out of the pool by his father.

“It’s been great having Deuce here,” said Jayson Tatum. “He’s enjoying it. He’s having a blast. He’s having fun. I’m happy he’s here to enjoy and share this moment with me.”

But in the unusual gap between the Celtics’ Game 3 win on Saturday night and Game 4 against the Miami Heat tonight — the NBA pushed the date back to allow the Western Conference finals to catch up, and also a avoid head-to-head battle with the NFL on Sunday — has left something approaching an echo in the emptied-out bubble.

“It’s eerie here with the amount of teams that are no longer here, because it’s so empty versus what it was,” said Brad Stevens. “But at the same time we’re thankful that we’re part of that. Thus far it’s been challenging in some ways, but a rewarding experience in every other which-way.

“I think one of the things that we’ve tried to do is we’ve talked about when we got here — using an opportunity to inspire, empower, and find joy playing a kid’s game together,” he said. “We’ve tried to keep that focus — there’s emotions that get involved, there’s noise that’s not worth listening to that you just move through. There’s things you do have to address to make your team better.

“We want to do all those things all within the context of putting our best foot forward and represent ourselves and our organization as well as we can. We talk about it constantly, it’s very important that we have a pulse on everybody in that regard, and that we all look out for each other. I think we’ve done a good job in that regard.”

Indeed, the Celtics were forced to overcome some of their own self-generated noise in the aftermath of their loud locker room argument following their Game 2 loss, and parlayed the agitation into a Game 3 win that cut Miami’s lead to 2-1.

Most appear to be satisfied with their ability to focus in the bubble.

“I guess doing the best you can to develop a good healthy routine and habits. Some of the things that I’ve picked up here, I feel like I’ll probably stick with them for the rest of my life,” said Jaylen Brown. “Being able to develop certain habits and things to help you kinda deal with being in a bubble, away from your family, in an uncomfortable environment. Everybody’s different, so everybody had their own adaption process but some of the things I’ve picked up, personally, here, are probably things that I would (work) for when I leave.”

There was, for example, Brown’s ability to rebound from subpar nights in the first two games of the series to impact the floor at both ends with his 26-point Game 3 performance.

“Try to play within the flow, for the most part. A lot of games it kinda comes to you. Sometimes it doesn’t and that’s where I get frustrated at times,” he said. “To me, I realize that, just being out on the floor, there’s so many different ways I can affect the game — with the ball in my hands, without the ball in my hands, it don’t really matter. I can assert myself whether the ball comes to me or not. Just being aggressive any time I catch it, being aggressive on defense, being an aggressive rebounder. And all those stuffs add up. I think it was, maybe, more of an emphasis on that for me in Game 3. And going forward it will be more of an emphasis for sure.”

As Brown’s coach likes to point out, going forward will simply be more difficult.

“Every game is hard. Every playoff game,” said Stevens. “To win a regular season game in the NBA is really hard, to win a playoff game is exceptionally hard. The score of the series doesn’t really matter. It’s just about being better prepared to play your best on the next given night. That’s all we usually talk about. You know that when a team lost its last one, you’re going to get a great shot, but you get a great shot every time. We’re gonna have to play our best game in Game 4, and after Game 4 is over, we’re gonna have to play better than that in Game 5, and that’s kind of how it works.”