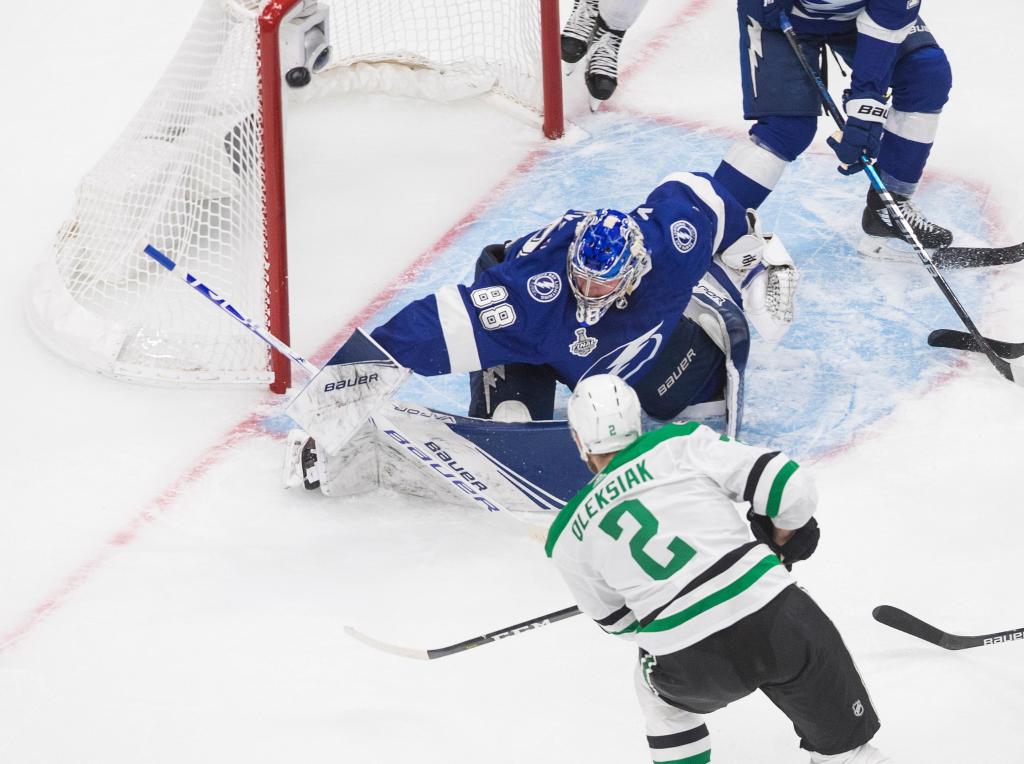 EDMONTON, Alberta — Dallas Stars players on the bench yelled at their teammates, “Hit ’em!” They did, over and over, the body checks and the shouts easily heard throughout an arena left empty because of the pandemic for this most unusual Stanley Cup Final.

The well-rested Stars came out and hammered the banged-up Tampa Bay Lightning, taking it to them for two periods and relying on goaltender Anton Khudobin to close the door in the third to win 4-1 Saturday night for a 1-0 lead. By the time the talented Lightning got rolling, it was too late.

“I don’t even know if you need to take a shower after the first two periods,” Lightning coach Jon Cooper said. “They came out, they were skating and I think we probably dipped our toes in the water a little bit and watched them skate around for a bit.”

Game 1 started looking every bit like Dallas had four days off since winning the Western Conference final and Tampa Bay just one after clinching the East. The Stars, who grinded their way through the playoffs with tight-checking toughness, came out hitting, knowing the Lightning are not fully healthy.

“They were right on top of us,” said Yanni Gourde, who scored Tampa Bay’s only goal. “They were on top of us right from the get go, so we’ve got to adjust and do a better job.”

Blake Comeau hit 6-foot-6 Lightning defenseman Victor Hedman on one of the first shifts, and Joel Kiviranta crushed top center Brayden Point into the boards to set up Joel Hanley’s first NHL goal of any kind. Defenseman Esa Lindell also got into the action early with Point, cross-checking him and leveling him in open ice.

“That’s just the makeup and identity of our team,” Comeau said. “I think we’re playing our best hockey when we’re engaged emotionally, physically, and getting in on the forecheck, pressuring their D, and everyone on our team has done a good job. When there’s a chance to finish the hit, you finish the hit.”

Four of the Stars’ 25 first-period hits were on Point, who missed two games in the Eastern Conference final and is visibly playing through pain. No. 2 center Anthony Cirelli injured his right leg in the sixth game of that series 48 hours before this one started.

Hanley and Jamie Oleksiak continued the Stars’ postseason trend of getting goals from defensemen, and Kiviranta scored late in the second period to provide some breathing room. Khudobin continued to shine in his first playoffs as the starter, making 35 often spectacular saves.

Khudobin was at his best making 22 stops in the third when the Lightning found their legs and outshot the Stars 22-2. He came up big on two penalty kills and strengthened his case for the Conn Smythe Trophy as playoff MVP.

“It’s a team sport, I tried to my part, they tried to do that part, and we all communicate there,” Khudobin said. “It’s always great when you see the guys blocking shots and things like that and cleaning front of the net, too.”

There was no rest for the weary Lightning, who were a step slow early after failing to close out the New York Islanders in five and needing overtime to move on. The final still would have started two days later as the league tries to speed through the bubble playoffs and award the Stanley Cup, but they would’ve accumulated 73 fewer minutes of wear and tear.

Taking advantage of that was a point of emphasis for the Stars, who took one big first step to try to wear down the Lightning much like St. Louis did to Boston in the final last year. Coach Rick Bowness said the Stars “know how we have to play” to be successful, and that style seemed to catch Tampa Bay off guard.

“We played an Islanders team that kind of sat back and relied on their structure a little bit, and Dallas seems to play a little bit more in our faces and we have to realize that,” Lightning defenseman Kevin Shattenkirk said.

Much is different 15 months since the Blues won it all for the first time in franchise history. Dallas is trying for its first title since 1999 and Tampa Bay since 2004, though this Lightning core reached the final in 2015.

The series got under way with the Stanley Cup stationed rinkside. For all the usual tradition of the Cup only getting to the arena when a team has the chance to win it, playing without fans allowed the league to put it front and center for the players to literally see what they’re playing for.

The Cup was put away after the first period. It could be seen next when the series is over.

NOTES: Hanley’s goal was his first in the NHL. … Stars forward Roope Hintz left in the third period after blocking a shot. … Jason Dickinson sealed it with an empty-netter with 1:18 left. … Yanni Gourde scored Tampa Bay’s only goal, and Andrei Vasilevskiy allowed three goals on 19 shots. … Injured captain Steven Stamkos took part in the Lightning’s morning skate and seemed to be skating well. General manager Julien BriseBois on Friday ruled out Stamkos for Game 1 but left open the possibility he could play this series. … The Stars are more tight-lipped about injured forward Radek Faksa, defenseman Stephen Johns and goaltender Ben Bishop. Bowness continues to call all of them “unfit to play.”