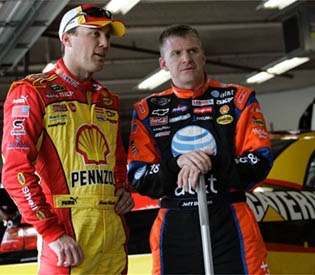 At the close of the 1980s, NASCAR began expanding its brand of auto racing beyond its comfort zones of the South and Southwest to other regions of the country.

NASCAR’s plans coincided with those of an ambitious entrepreneur from Maine named Bob Bahre, who in 1990 converted a huge swath of land in Loudon, N.H., into New Hampshire International Speedway.

NHIS was renamed New Hampshire Motor Speedway when Speedway Motorsports purchased the track in 2008. The Magic Mile, which it became known, will host the NASCAR Cup Series Foxwoods Resort and Casino 301 on Sunday at 3 p.m.

As New Hampshire was establishing its place as a NASCAR destination, the driver that helped put Loudon on the stock car map in the 1990s was a rising star from (incredibly) South Boston, Va., named Jeff Burton.

Burton’s first cup series race was the 1993 running of the Slick 50 500 at New Hampshire and he would become the dominant driver there for a decade.

“When you think about Boston and the New England area, there were an incredible number of race fans up there,” said Burton. “It was amazing the number of people from Pennsylvania on up that I would get fan mail from.

“It has become an important place for us to be and it’s important for the sport to be there because there are so many race fans there. It was important for us at the time to go where the fans were. Racing is part of the New England culture.”

Burton found the quirky 1.058-mile track with its low banked turns and tight straights a nice fit for the stable of short track cars in the Roush (Fenway) Racing organization.

Burton won a record four races in four straight seasons from 1997 to 2000 with three in July and one in September. Kevin Harvick equaled Burton’s record with a victory in last July’s Foxwoods 301.

“What you get in those situations is what your car needs to do and I was working with a group of people that knew how to do it,” said Burton.

“Some of that was timing and being with the right people at the right time. The track never changed much from one race to the next although the races we won, we won with different setups.”

Burton was involved in two of the most famous races in the history of NHMS. On July 13, 1997, Burton set a track record that stands to this day. Burton completed the trip in a record time of 2:42.35 with an average speed of 117.134, a run that included remarkable stretches of green flag racing.

“There were clearly not a lot of cautions,” said Burton. “You have those races sometimes where things just kind of click off and that was just one of those days.”

Burton’s victory in 1999 got off to a bad start in the time trials on Friday. Burton began the race in the 38th position and managed to take the checkered flag on an oval where track position is paramount.

“I was terrible in qualifying but we had a really good race car,” said Burton. “We had fast race cars and that’s always a key to success.”

Burton’s nemesis at New Hampshire during that stretch was Hall of Fame driver Jeff Gordon. Following two of Burton’s July victories, Gordon came back to win in September.

The two Jeffs engaged in a spirited rivalry at New Hampshire and beyond. While Jeff Gordon went on to have one of the most outstanding careers in NASCAR history, Jeff Burton won the day at New Hampshire.

“He was getting the better of me more than the other way around,” said Burton. “Racing with Jeff and his team was always difficult but it was fun racing against people that you respect.

“Jeff was a great race car driver with a tremendous career and he has done a tremendous amount of good for our sport.”

Burton was involved in all aspects of racing and he finished his career with 21 Cup Series races and 27 on the Xfinity tour. Burton knew his way around the garage and excelled at public relations, building a loyal fan base for Roush Racing and Richard Childress Racing. Those qualities earned Burton the nickname “the Mayor” during his racing career.

Burton has since taken on the role of ambassador to the sport while simultaneously acting as its conscience. NASCAR frequently seeks Burton’s assistance on safety issues and programs to protect the drivers. Burton also serves as an in-studio race analyst for NBC Sports and will have a voice in the coverage of the Foxwoods 301.