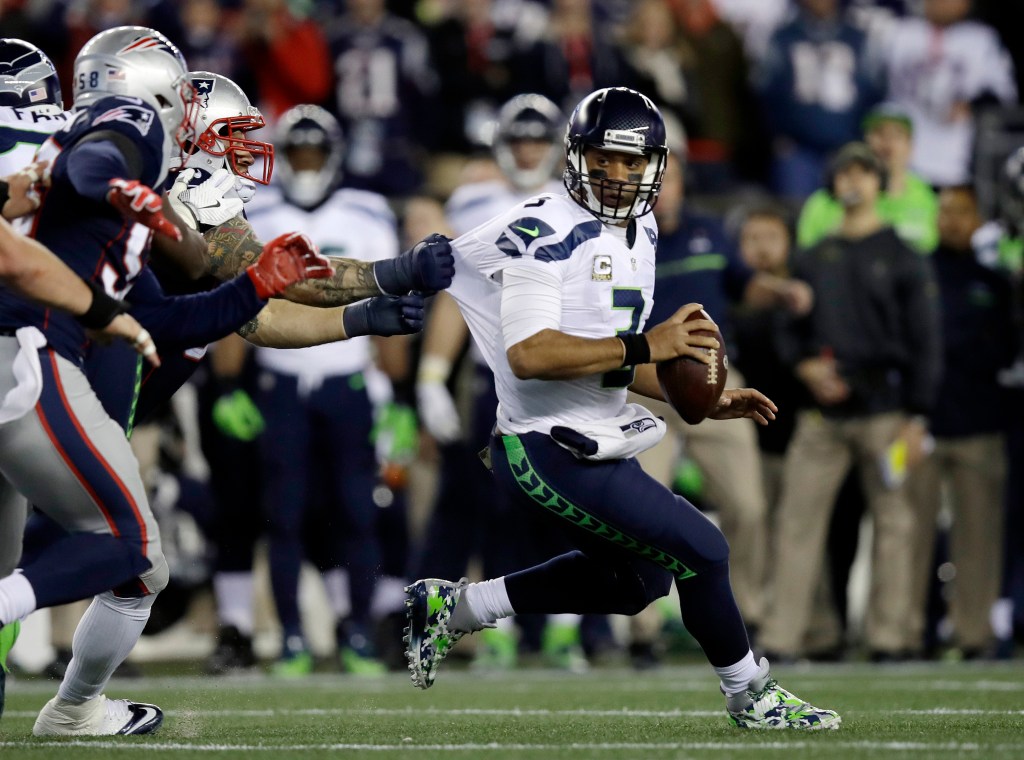 It’s the first lesson of playing safety for Bill Belichick.

For decades, Belichick has drilled this notion into his defensive backs to stress the importance of denying deep passes to strong-armed quarterbacks. This week, you can bet Belichick has given the Patriots secondary an earful of expletives. Because no passer is more dangerous downfield in today’s league than Russell Wilson.

“I don’t think there’s a better deep ball passer in the league in terms of decision making and accuracy,” Belichick said.

That praise was actually a step down from the compliment he delivered the Seahawks’ star quarterback moments earlier Thursday, saying: “I don’t really see anybody better than this player.”

During Seattle’s season-opening win at Atlanta, Wilson played up to Belichick’s billing. He completed 88.5% of his passes, fired four touchdowns and a matching number of incompletions. He totaled 322 passing yards almost effortlessly.

On throws traveling at least 10 yards downfield, Wilson went 7-of-8 for 149 yards and a touchdown. Last season, his quarterback rating on passes that traveled at least 20 yards registered at an outrageous 121.24, per Pro Football Focus; 15 points higher than his overall rating for the season. Since then, Wilson’s weapons have only grown more explosive.

Seahawks wide receiver D.K. Metcalf is pushing Pro Bowler Tyler Lockett to become the team’s No. 1 option, as a 6-foot-4, 230-pound specimen with 4.3 speed and incomparable strength at his position. Patriots safety Devin McCourty ranks Metcalf and Lockett with any wideout duo in the league. Behind them lies more danger.

“One of the toughest things about this whole group — you take (David) Moore and then you throw (Phillip) Dorsett in there too — is just speed,” McCourty said. “You look at our depth chart that we get every week, it’s 4.3-something, 4.4, 4.2. Everybody can run.”

If Seattle’s deep passing game can be considered one of the NFL’s more unstoppable forces, the Patriots pass defense is one of its immovable objects. Last season, the Pats ranked second in yards allowed per pass attempt on throws that covered at least 20 yards through the air. Opponents’ quarterback rating ranked third-worst versus the Pats on deep throws, despite the fact they combined to throw more against them than all but eight other NFL defenses.

Much of that credit is due to the raw talent that comprises the league’s best secondary, though the GTFB discipline and coaching with which the Patriots have been instilled deserves recognition. Reigning Defensive Player of the Year Stephon Gilmore routinely explains his steady playmaking by mentioning technique. He shared Friday that properly defending a deep ball is predicated on several factors, including the coverage called, his opponent and positioning.

But when the ball is in the air and he’s striding step for step with a receiver downfield, Gilmore has one thing in mind.

“One thing I try to do is use the sideline as my friend,” Gilmore said. “Push (the receiver) to the sideline, and make the quarterback make a tough throw and try to be in position to make a play on the ball.”

If Gilmore can sideline Metcalf or Lockett for four quarters, handling the other should fall to J.C. Jackson. Gilmore expressed utmost confidence in Jackson on Friday, saying he can cover anybody. Jackson has earned such high praise through performances like Sunday’s, when he allowed one catch on four targets and grabbed a game-sealing interception versus Miami.

A year ago, Jackson denied deep balls at an obscene level. Per PFF, Jackson caught all five of his interceptions on deep throws, while allowing a completion percentage of 11%.

“He’s a natural out there, so it’s fun playing with him because you can see him growing each and every day,” Gilmore said. “Getting on that field, he loves playing the game, so he has that thing about him, and I’m happy he’s on our team.”

And yet, as sticky as Gilmore and Jackson may prove in coverage, there’s no defense for the perfect pass. What separates Wilson from good quarterbacks and elevates him into rarefied air is his ability to create plays from nothing — either through his mobility or dropping a ball into a window that appeared closed.

Whether the Patriots can keep those windows shut long enough to pressure him into negative plays will be the game within the game that should decide Sunday’s winner.

“I don’t think you can say anybody’s better at throwing that deep ball than him,” said Patriots cornerback Jason McCourty. “He’s an elite quarterback in our league. He has been for some time.”

Time to buckle up and GTFB.