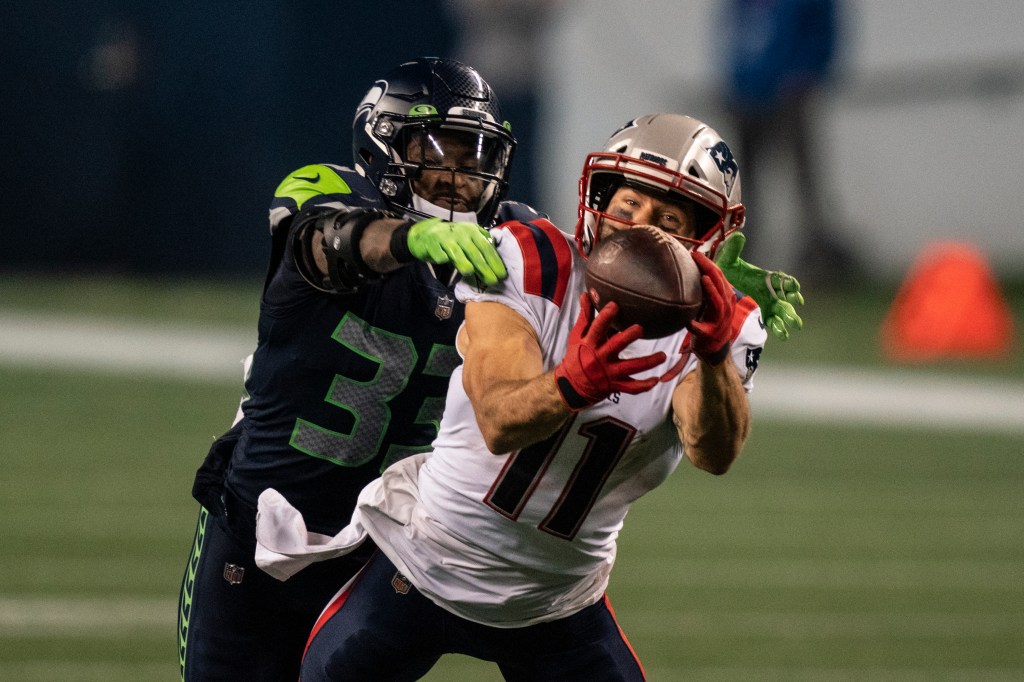 Cam to the rescue.

The Patriots saved themselves from sound defeat Sunday by finally unleashing Cam Newton, who carried the offense 154 yards over two possessions in the final minutes and came as close to clinching a 12-point comeback as one can. He was stellar again, even accounting for his failed goal-line run as time expired, the flashbulb memory of another Pats-Seahawks classic. Newton totaled more than 400 yards of offense, plus three touchdowns.

The Patriots defense, however, got smoked, allowing five touchdown passes for only the second time in the Bill Belichick era. It was a front-to-back failure against one of the NFL’s sharpest passers. Some mistakes could be excused — Russell Wilson was brilliant — while others will cost the Pats future wins if they’re allowed to continue.

Here are the position-by-position grades from the Pats’ loss Sunday:

Newton’s raw numbers were impressive enough. But the stats he posted down the stretch, under pressure from a running clock clock and hounding defense? Downright spectacular.

Trailing over the final 17 minutes of play, Newton completed 15 of 20 passes for 219 yards and a touchdown. He scrambled twice for 25 yards and slipped multiple would-be sacks. He repeatedly hit Julian Edelman deep, firing into tiny, moving windows and applying appropriate touch on screen passes versus Seattle’s slot blitzes.

Newton did throw late twice on an out route to Damiere Byrd and got burned the second time for an interception. He also believed he could have scored on the final play had he bounced outside, an arguable error in judgment. While that can never be proven, Newton showed what he’s capable Sunday.

Without James White, the Pats leaned heavily on Rex Burkhead, the only all-around player remaining in their backfield. Burkhead excelled as a pass catcher with 47 receiving yards, but hardly threatened as a runner. He also allowed one pressure on Newton in blitz pickup.

Meanwhile, Sony Michel couldn’t squeeze even 20 yards out of his seven carries. He was usually dropped at first contact. Rookie J.J. Taylor took one handoff and went backwards. At this point, opponents are better off forcing Newton into gives on option runs. No running back has come close yet to leading the team in rushing.

The good news is the outstanding question of what Damien Harris might offer could be answered in as little as two weeks.

Julian Edelman played 11 years with the greatest quarterback of all time, and yet he never enjoyed a game quite like Sunday’s.

Edelman set a new single-game career high with 179 receiving yards recorded over eight catches. He scorched the Seahawks deep, both down the seam and running deep crossers. Edelman’s deep-threat act won’t last long, but his chemistry with Newton is the best news possible for a developing Patriots passing game.

The other would be the emergence of N’Keal Harry, who played like a certified NFL possession receiver Sunday. His 13 catches through two games already outnumbers his dozen from last season. Harry repeatedly delivered in the clutch, converting a fourth down on the opening drive and catching three passes on the last possession. He had eight catches.

You never would have known the Patriots played 10 snaps with Ryan Izzo and Devin Asiasi at the same time.

Asiasi has yet to record an NFL reception, while Izzo caught one pass for the second straight game. Any leap in receiving production from this group may hinge on Dalton Keene’s return from a neck injury. The blocking also took a step back from the opener. It wasn’t terrible, but there’s a reason the Pats continue to favor jumbo sets and unbalanced lines.

Left guard Joe Thuney was the only lineman to post a clean sheet.

Offensive tackles Isaiah Wynn and Jermaine Eluemunor both surrendered two pressures. Center David Andrews was responsible for a quarterback hit, one hurry and a run-stuff. Shaq Mason allowed one hurry, but failed to generate as much push in the run game as expected.

Rookie lineman Michael Onwenu spelled Eluemunor for multiple series at right tackle, including the last drive. While he got folded on the final play, Onwenu showed well again, both as a sixth lineman and traditional tackle.

Overall, the line allowed a solid pressure rate of 17%.

Defensive tackle Lawrence Guy was the Patriot up front who performed well against both run and pass.

He recorded three pressures, pushing the interior of the pocket against Wilson early and late. In far fewer snaps, Deatrich Wise drew a holding penalty and earned one hurry. On the flip side, Byron Cowart and Adam Butler got run over inside. The Seahawks ran when and wherever they wanted, most glaringly up the gut. That’s two down games in a row for Butler.

Third-year defensive tackle Nick Thurman held up in his five snaps of action.

No one harassed Wilson better than Chase Winovich, who finished with three hurries, two QB hits and a half-sack. That said, few defenders also provided less than resistance to Seattle’s run game than him.

Softly set edges were a problem for Winovich and John Simon, who led the team with eight tackles. In the middle, Ja’Whaun Bentley was outrun by Wilson and running backs Chris Carson. He took bad angles and picked the wrong gaps when firing at the snap. Otherwise, Shilique Calhoun earned a full sack of Russell, while Derek Rivers combined with Winovich on the other.

That was the only playmaking from this group. Wilson was comfortable most of the night.

Thanks mostly to Wilson’s pinpoint throws, Stephon Gilmore lost his head-to-head battle with D.K. Metcalf, yielding three catches for 85 yards and a touchdown over five targets. On the touchdown, Metcalf snapped an apparent deep over route back toward the sideline, which left Gilmore a step behind after he angled to undercut the in-breaking route. Once Metcalf made the catch, there was no stopping him.

Jason McCourty allowed two touchdowns, both also on perfect throws. Jonathan Jones was beat multiple times by Tyler Lockett in key situations. Devin McCourty expertly patrolled the back end and maximized his good fortune by taking a tipped pass back for a pick-six on the game’s third play from scrimmage.

Kyle Dugger provided a few quiet highlights, as his snap count jumped from 11 to 34. He often played close to the line of scrimmage and flashed as a blitzer. Adrian Phillips allowed the final touchdown pass to Carson.

Folk also hit a chip shot and four extra points. Jake Bailey and the kickoff team allowed one 44-yard return to Travis Homer, an unusual sight for a coverage unit that usually has opponents on lockdown. As a punter, Bailey averaged 56.5 yards per boot. Dugger and Taylor made unremarkable debuts as kick returners.

Defensively, the Pats threw more zone coverage than expected against Wilson and dropped eight nearly as much as they blitzed. When they did blitz, Bill Belichick sent a slot corner of safety off the edge. Nothing, however, could unsettle Wilson.

On offense, circumstances freed Newton from the constraints of another game plan that seemed intent on limiting his responsibilities as a passer. Because no combination of personnel — not 1-back, 2-back or jumbo sets — could start the running game. Thankfully for offensive coordinator Josh McDaniels, Newton was able to shoulder the game.

HEAD OF THE CLASS

WR Julian Edelman A new career high at 34? Edelman had a night to remember in Seattle.

DT Lawrence Guy Guy was responsible for three pressures and contributed to a couple of the Pats’ rare run stops. He was their only reliable D-lineman Sunday.

BACK OF THE PACK

LB Ja’Whaun Bentley Bentley’s run fits were a mess and his lack of quickness put him in tough spots versus Wilson on scrambles. One of the worst games of his young career.

CB Jonathan Jones Jones committed a key third-down penalty just before halftime and allowed three catches that resulted in first downs, tied for most on the team.

RB Sony Michel He sat for almost the entire second half. Michel’s usefulness is waning.