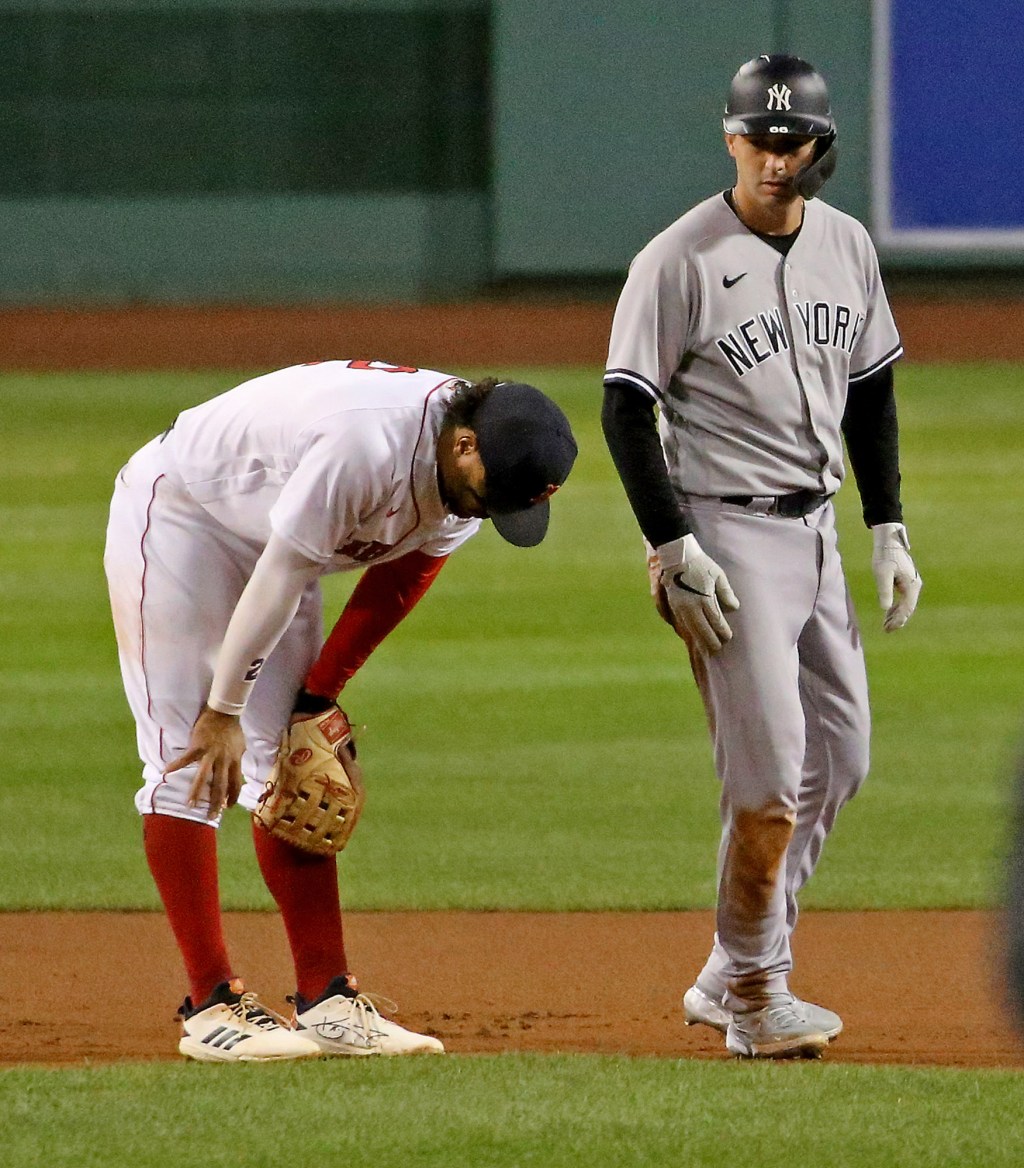 The Red Sox have one more chance to beat the Yankees this season.

In what’s been a season of franchise-record lows, the Red Sox have been thoroughly dominated by the Yankees. In a week, the Yanks will likely be off to the postseason, while the Red Sox go home for a long offseason. In the meantime, the Yankees are running all over their AL East rivals, and after an 8-0 victory on Saturday night, they’re a win on Sunday away from sweeping all 10 games in the season series.

Here were the takeaways as the Red Sox were shut out for the first time this season:

Before Saturday’s game, Red Sox manager Ron Roenicke was asked how much separates his last-place club and the Rays and Yankees, who hold the top two spots of the division. The answer, simply, is the disparity in starting pitching. The example then unfolded at Fenway Park.

Chris Mazza made his fifth start of the season and the results were mostly typical. He put the Red Sox in a 2-0 hole in the first via a pair of walks, and again lasted far below the number of innings that should be requisite of a starter. He went just four innings before Dylan Covey took over, and he proceeded to serve up a three-run homer to Clint Frazier that ultimately sealed the Red Sox’ fate.

Meanwhile, Yankees starter J.A. Happ threw a gem, tossing eight shutout innings and allowing just four hits. On their best night this season, the Red Sox could only wish they could have that. They’ve only seen a starter go seven innings in a game twice.

“We’re not going to be able to compete with these teams unless we pitch really well,” Roenicke said of the Rays and Yankees. “We know we’re going to have to pitch. I think everybody, if you look at everybody this year that’s winning, they’re pitching really well, and so that’s something that we have to improve on if we’re going to compete in this division.”

Bogaerts off his game

Xander Bogaerts is as reliable as they come in the game at shortstop. But for some reason, he hasn’t been right defensively the last few games.

Bogaerts had committed just two errors in his 44 games this season before committing one in Thursday’s win over the Marlins. Then on Saturday, the shortstop made a pair of uncharacteristic mistakes in the fourth inning that directly resulted in Yankees runs. The first one came with a runner on first and one out. Mike Tauchman hit a grounder to Bogaerts for what could have been a double-play ball, but the shortstop couldn’t transfer the ball to second and all runners were safe. The next batter, Kyle Higashioka, then hit an RBI single to put the Yankees up 3-0.

The next play was even more flummoxing. Tyler Wade hit another grounder to Bogaerts that should have been a double play to end the inning, but after the shortstop tagged second for the force out, he threw the ball away going to first, resulting in another Yankees run.

“Bogey is usually so steady,” Roenicke said. “If balls are to him, I always know we’re going to get an out. He’s a steady player, and so that’s very unusual for him to not make those plays today.”

The Red Sox’ outfield defense, led by Alex Verdugo, has been outstanding this season, but they’ve been sloppy in the infield. As a team, the Red Sox now have 39 errors this season, which leads the American League and is the second-most in baseball.

The rivalry between the Red Sox and Yankees has almost never been as one-sided as it is right now. After Saturday’s loss, the Red Sox are 5-23 against their rivals since sweeping them in the 2018 ALDS en route to a World Series title.