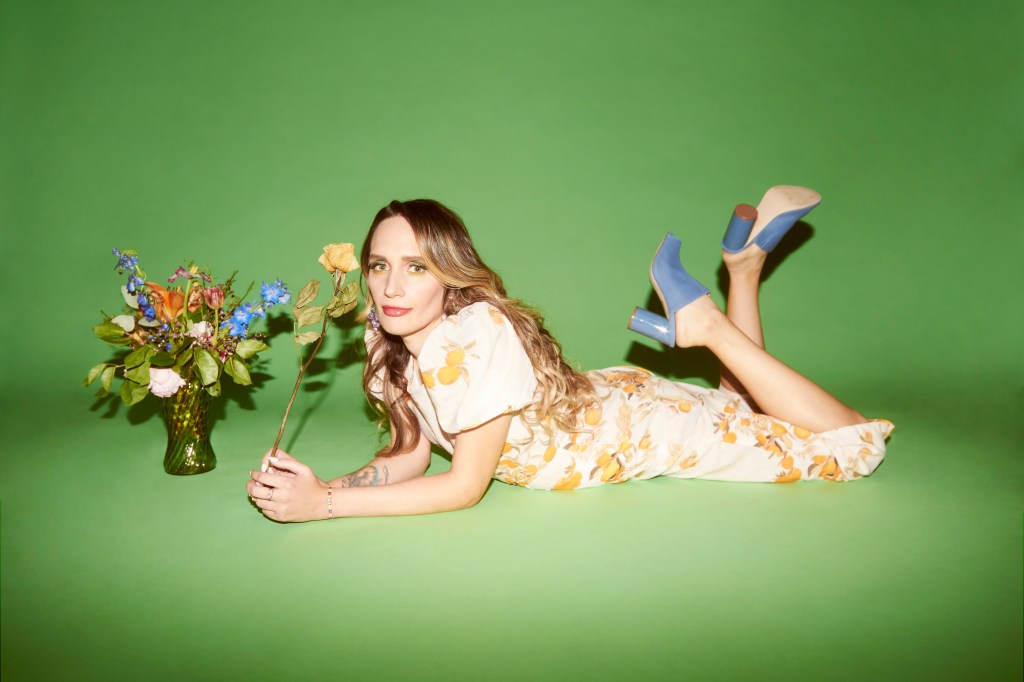 Sadie Dupuis loves pop. The singer-songwriter-guitarist who records as Sad13 when not working with her Northampton-based band Speedy Ortiz also knows life is a hellscape of chaos and cruelty. These two things — sweet-as-candy hooks and the madness of our modern moment — come together with purpose on Sad13’s sophomore album “Haunted Painting” (out Friday).

“I love things that sound bright,” Dupuis said. “But, as someone who really likes pop music and big hooks and is anxiously preoccupied with dystopian presents and futures, I think there is an intentional juxtaposition in (my music in) most places. I don’t want to do a song about climate change that sounds apocalyptic. I’d rather talk about these things while giving people a reprieve with some fun synths and drum programming.”

Dupuis took darkness and mixed it with bits of discotheque dance music, power pop, twee indie and just the right amount of noise rock. Take “Ruby Wand,” a song that bounces on tender keyboards while Dupuis sings, “Somebody take my metal away/I just dive into my skin, looking for proof I’m okay,” and then, as a burst of dissonance breaks the pleasant melody, “I need control/Just afloat, but treading all along.”

“‘Ruby Wand,’ with both the lyrics and the arrangement, feels really literal to me,” she said. “I don’t think of the synths as cheerful. I think of them as an extension of how it feels to want to derive control from rituals, from knowing how things are going to plan out. To me it’s a lot of really calculated synths pushing against guitars and basses, and a drum solo breakdown where I’m feeling a little bit more out of time and out of control.”

“I wouldn’t say it’s hard for me to be earnest,” she added. “But it would be hard for me to do a song about mental health that’s purely maudlin. I really like stuff that has a wide range of human emotion whether that’s in the lyrics or in how it sounds.”

Dupuis makes control a theme of the record. While wide ranging emotions and sounds carry over from her work with Speedy Ortiz, “Haunted Painting” is the work of an auteur. She wrote and produced the record on her own, also engineering much of it and played a dozen instruments over the 11 tracks (guitar, obviously, but also keys, lap steel, marimba, glockenspiel, theremin …).

“I know this record sounds more like Speedy than the last Sad13 record, but the distinction is, ‘Did I want anyone else to contribute a single note of writing, did I want to have production conversations about anything?’” she said. “The answer was, for this record, I wanted to just do something on my own.”

It made for a lot of work. But, even as she wrote, she could picture a final product where pop and chaos met.

“I started home recording when I was 14 and started making albums a couple years later,” she said. “I have a sense of what feels right in my own songs. … I have worked hard to make the sad songs funny or make the slick production songs about something of substance.”

Then she added with a laugh, “I don’t think I’ve reached a point where I’ve said, ‘This is too poppy for a song about a military dictatorship.’”