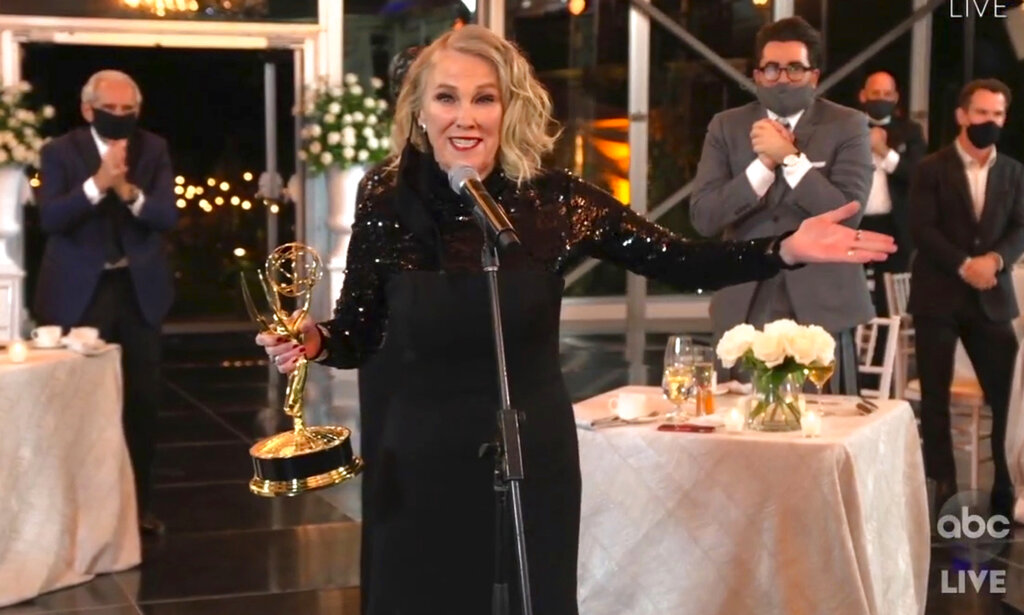 Eugene Levy has ridden up “Schitt’s Creek” to his first acting Emmy.

Levy won the Emmy Award for best actor in a comedy series on Sunday night for Pop TV’s “Schitt’s Creek,” taking home the trophy for the sixth and final season of the show he co-created with his son, Dan Levy.

“It’s kind of ironical that the straightest role I’ve ever played lands me an Emmy for a comedy performance. So now I seriously have to question what I’ve been doing for the past 50 years,” said Levy.

With Levy’s win, “Schitt’s Creek” takes the first two Emmys of the evening.

Co-star Catherine O’Hara, after 45 years of nothing-but-funny and her own six-year run down “Schitt’s Creek,” also collected her first acting Emmy.

O’Hara won the Emmy Award for best actress in a TV comedy for her role as Rose family matriarch Moira on “Schitt’s Creek.”

Jennifer Aniston presented the award, the first of Sunday night’s ceremony, and O’Hara accepted in a remote restaurant-like pavilion with the “Schitt’s Creek” cast in face masks and formalwear around her.

A man in a black tie hazard suit handed her the trophy.

“May you have as much joy being holed up in a room or two with your dear family as I have with my dear Roses here,” an emotional O’Hara said.

The win puts O’Hara in the elite company that her peers and co-stars have already held her in for decades.

Past winners of the award include Lucille Ball, Mary Tyler Moore, Candice Bergen and Julia Louis-Dreyfus.

O’Hara had one previous Emmy for writing on “SCTV” in 1982 in the earlier days of years of collaboration with her “Schitt’s Creek” co-star Eugene Levy.

The pandemic-era Emmys looked like any awards show as host Jimmy Kimmel took the stage at the Staples Center in a tuxedo and started cracking jokes to laughter from famous audience members.

But it was anything but typical. While Kimmel was real as he opened the 72nd Emmy Awards on Sunday night, the audience was clearly phony, inserted from past footage.

“Welcome to the pandemmies!” Kimmel said to open his monologue. “You can’t have a virus without a host.”

Kimmel played it straight until halfway through the opening bit, when he admitted he was nearly alone and the telecast showed the sea of empty seats.

E! host Giuliana Rancic had to miss the Emmy Awards virtual pre-show after she tested positive for the coronavirus.

Rancic announced in a video from home Sunday that she tested positive for the virus along with her husband and son. The pre-show was hosted by Brad Goreski and Nina Parker.