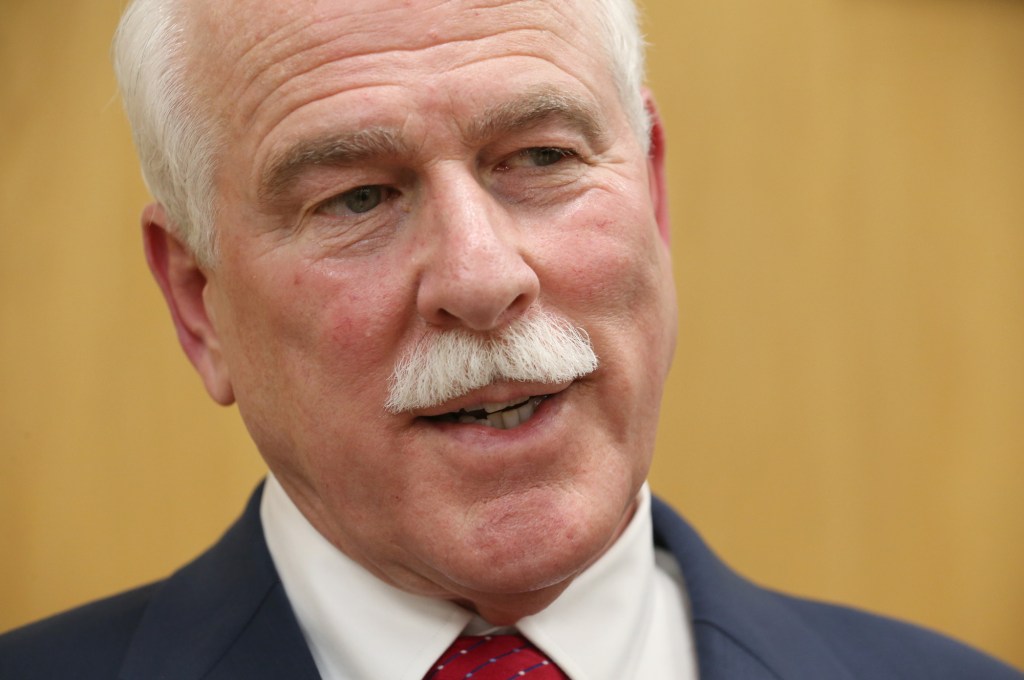 A defiant Sheriff Thomas Hodgson is warning Beacon Hill lawmakers he will ignore any legislation crafted to keep his deputies away from polling places, calling the tempest an eleventh-hour political stunt.

“No legislator is going to tell me when I can and cannot respond to someone who needs protection,” Hodgson told the Herald Tuesday. “I will not stand down!”

State Rep. Antonio Cabral (D-New Bedford) is attempting to amend state law by banning “county or state law enforcement officers” — including sheriffs and their deputies — from “within 300 feet of a polling place.” The legislation takes direct aim at Republican Hodgson, honorary chairman of President Trump’s re-election campaign in Massachusetts.

The aim of the amendment, said co-signer state Rep. David Linsky (D-Natick), is to guarantee that local police departments have jurisdiction over any problems at the polls.

The move also comes after the president vowed late last month to “have everything” — from sheriffs to U.S. attorneys — help keep an eye on the polls. Attorney General Maura Healey issued an advisory last week highlighting laws stating that intimidating or interfering with voters is illegal, citing Trump’s statements.

“When the president is making threats to send in other people over imaginary voting irregularities,” said Linsky, “there’s no reason to do that in Massachusetts.”

The Bristol sheriff, who has also come under fire from Democrats for housing illegal immigrants facing deportation in his county jail, said keeping the peace at polling places is not about Republicans versus Democrats.

“Why would any legislator want to make anyone less safe? This has nothing to do with Donald Trump’s campaign,” Hodgson said. “In a time when we have COVID, playing with this nonsense is outrageous. They ought to be ashamed of themselves.

“We’ve been doing elections forever,” he added. “They’re basing this on some other agenda.”

Unrest at polling places, however, is not new in Massachusetts.

Bill Clinton’s surprise visits to polling places around the Bay State in 2016 had the Secretary of State’s Office reminding the campaign that politicking is not allowed near voting booths. He was spotted in West Roxbury, Newton and New Bedford.

Bill Clinton made his swing through Massachusetts on Super Tuesday that year, drawing large crowds that some said caused parking headaches for voters trying to enter the polling places.

As for Cabral’s bill, it’s on the House docket and if passed, sheriffs would need “written approval of both the secretary of public safety and security and the board or officer in charge of the police force of the city or town” before they could enforce the law.