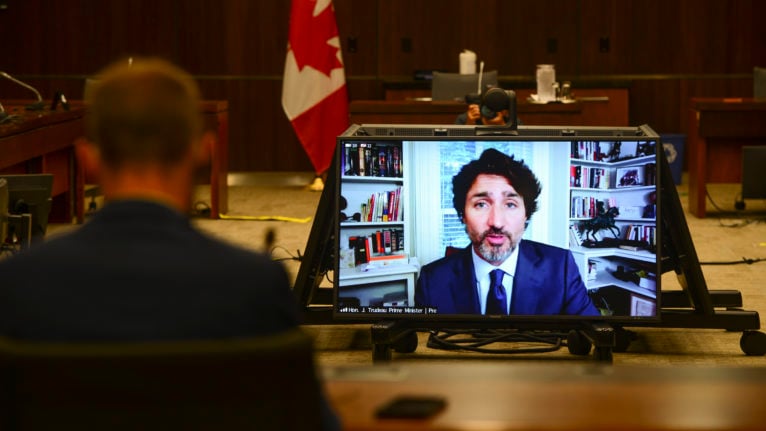 Nobody appreciates the subtlety of a light touch. We are pleased to take the Prime Minister at his word, as captured in Thursday’s virtual meeting of the Commons Finance Committee, and to report the sum of Justin Trudeau’s involvement in the development of the Canada Student Service Grant.

(a) Amid a global public-health crisis there is preliminary brainstorming. What about something like Katimavik, the PM asks. One presumes this is a familiar refrain.

(b) on April 22, more than a month after the coronavirus lockdown began, the PM appears on the front step of Rideau Cottage and announces that nearly $9 billion will soon be disbursed to post-secondary students and recent grads. Roughly one-tenth of that sum will go to a new Canada Student Service Grant (CSSG). Trudeau’s announcement captures a certain conceptual tension—the program is for “students who choose to do national service and serve their communities,” and it will “provide up to $5,000 for their education in the fall.” It’s easier to be selfless if there’s something in it for you. On the day Trudeau makes this announcement, he does not know how the new program will be delivered.

(c) Sixteen days pass. Trudeau and his chief of staff, Katie Telford, hear nothing further about the delivery of the CSSG. On May 8, hours before a cabinet meeting, they learn that the public service wants the program delivered by WE Charity, which was not previously in the business of delivering government programs. Trudeau is expected to go into cabinet and rubber-stamp this. He does not! He pushes back! He knows there are “perceptions” based on frequent interactions between WE and assorted Trudeaus and Morneaus. He has the CSSG pulled from the day’s cabinet agenda. He tells the bureaucrats to “try and make sure everything [is] done exactly right.”

(d) Fourteen days pass. Before another cabinet meeting, the PM is told that WE has been vetted and it checks out fine, and his “binary choice” is to let WE expand into the program delivery business or to abandon the CSSG altogether. Given this choice, he lets his May 8 concerns about perceptions slide and accepts the WE delivery mechanism.

So that’s a month, during which the Prime Minister’s only instructions are “wait” and “OK.” This is plausible, and would be plausible even in the absence of a global public-health crisis and attendant economic meltdown and, perhaps, even if somebody else were the Prime Minister. But Trudeau also spent his Thursday afternoon assuring everyone he takes a keen interest in youth service and that he has had, through unfortunate force of habit, to become a keen student of the conflict-of-interest law. So…this is how he watches a file like a hawk?

I should say that by the standards of the July they’d been having, Trudeau and Telford had a good afternoon. The opposition parties didn’t break them on the witness stand, forcing them to blurt out admissions of guilt. Trudeau was approximate in his understanding of things—how much did assorted Trudeaus and Morneaus get paid? Who in his office worries about whether somebody is or should be a registered lobbyist?—but Telford was poised, better briefed than her boss, and respectful even towards antagonistic MPs. (I’m reminded that it would be good if this government had somebody who was familiar with the PM’s thoughts and actions, and authorized to talk about them, full-time. Might as well dream big.)

Together Trudeau and Telford managed to put on the record the elements of an argument that can be used by Liberal partisans who’ve been wondering how on earth they’re supposed to defend this honker. Trudeau cares about The Youth. His government was moving at light-speed in a crisis. The civil service, which absolutely nobody is throwing under any kind of bus, made all the decisions everyone’s angry about. Apologies, which are off-the-rack in this government and never bespoke, have been deployed: they must “do better.” (Do what better? Never mind.)

Sure, bits of the argument do come untucked if you tug at them, including the notion that nothing was authorized before May 22, given that WE was at work on the program from May 5. Further investigation is needed and will happen. But I keep coming back to what we can learn even if we take the top Liberals’ testimony at face value.

First, that tension over what the CSSG was even supposed to do. Charlie Angus, the NDP’s lead interrogator, pointed out that the program would have paid $10 an hour, far less than the minimum wage. Trudeau was politely angry. Canada was built by volunteers, darn it, he said. (Fact check: mostly false.) If you insist on money for volunteering, he said, “then you are missing a really important part, Mr. Angus, of the fabric of this country.”

Contrast with Telford, who said later that as they considered which support programs the government could introduce, one question that occurred to them was, “How do we help those students who had rent to pay, who needed to put food on the table?”

Well, de deux choses l’une: Either you’re celebrating the fabric of the country, in which case you shouldn’t pay, or you’re helping students pay rent, in which case you need to stop chintzing. The Finance Committee has already heard from witnesses who said that if the government had simply run the CSSG in-house and avoided WE’s impressive overhead costs, it could have paid the program’s entire cohort a proper minimum wage. The lower stipend, handily, injected just enough money into the program that there would have been money left over to cover WE’s impressive overhead costs.

Second problem. Trudeau got into a debate with Conservative finance critic Pierre Poilievre over the content of the conflict-of-interest law. Do you know what Section 21 says, Poilievre asked. Trudeau couldn’t recite it by heart. Again, he shouldn’t be expected to. Poilievre refreshed his memory. It’s the section that says a public office-holder “shall recuse” himself from “any matter” on which there’s a conflict of interest.

Oh-ho, Trudeau said, but do you know how the act defines “family”? It’s an office-holder’s spouse or dependent children, he said, quoting from the act. So his mother and brother, he implied, can’t be included!

That’s great, except that the next paragraph after the one that defines “family” also defines “relatives,” in the way you or I would define relatives. And the rest of the act rules relatives’ benefits out, just as clearly as it forbids family benefits.

Last problem. The CSSG represented half of one per cent of all the money this government has allocated to “supporting” Canadians. How confident are you that the other 99.5 per cent is in well-designed and well-administered programs?