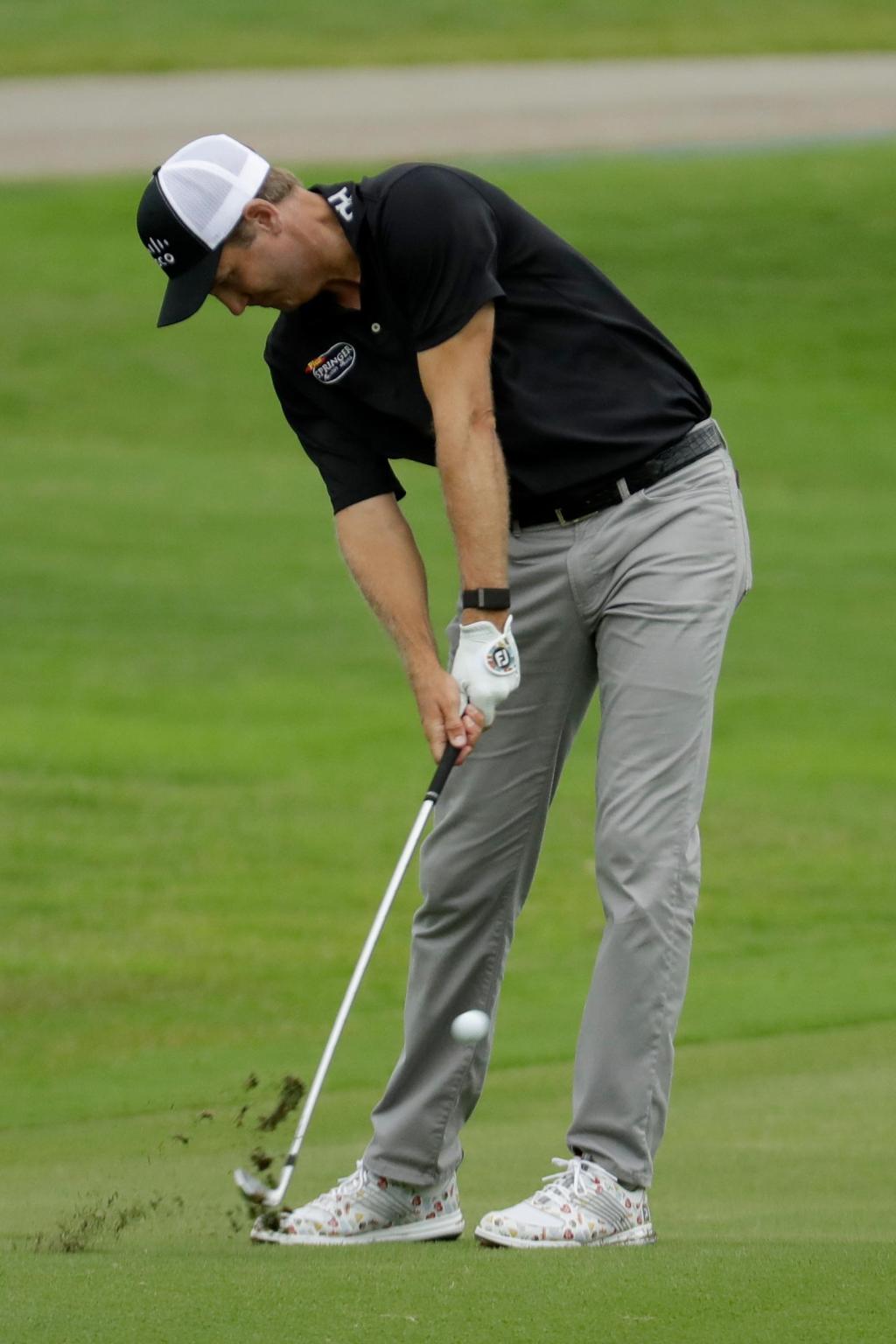 He has a recent reminder of how to best protect a lead in the final round — even if that memory is a bit painful.

“What I learned at the Travelers is just you cannot control the result, you can’t control the way you’re going to feel, where the ball’s going to land, if putts are going to go in …,” Todd said. “The best players in the world treat each final round like it’s just another day, and they just go out there and try to execute and stick to their game and let the results fall as they do.”

Todd started the third round with a two-stroke lead. He had five birdies and four bogeys to put him at 13-under 198 on a nearly perfect day at TPC Southwind with the temperature in the 70s.

The 35-year-old Georgian is looking for his fourth career victory and third since last fall. This is Todd’s second 54-hole lead since the PGA Tour’s return to play. He shot a 75 in the final round of the Travelers Championship and tied for 11th.

“I’m excited to be in this position and feel like if I can go out there and swing a little better and keep this putting momentum going, I’ll be in good shape,” Todd said.

Byeong Hun An of South Korea, who had four straight birdies on the back nine, finished with a 66. Rickie Fowler was two strokes back after a 69.

Defending champ Brooks Koepka struggled early before he reeled off six birdies in eight holes for a 68. He was fourth at 9 under.

Justin Thomas, who can become No. 1 in the world with a victory here, was fifth at 8 under after a 66. He won on this course in 2018 before the event became a World Golf Championship in 2019.

“I kind of found something those last 12 holes where I really started hitting some good putts and making them with good speed,” Thomas said. “Yeah, it was nice to shoot 4 under on that back nine to give myself somewhat of a chance.”

Phil Mickelson (66) and Louis Ooosthuizen (68) were in a group five strokes back.

Todd started where he left off Friday, rolling in a 14-footer for birdie on No. 1 to reach 12 under. Todd couldn’t get out of the rough on the par-4 No. 5 on the way to only his second bogey of the tournament.

Fowler holed out from the green-side rough on the par-5 third to pull within two. He then joined Todd atop the leaderboard on No. 7. He hit his second shot from 190 yards to 9 feet and made the putt for birdie.

Todd took the lead back to himself on the next hole with a 22-foot birdie putt on the par-3 eighth. Fowler answered with a 17-foot birdie putt on No. 9, making the turn with his third birdie and a share of the lead at 12 under. Todd pushed his own birdie chance just right of the hole.

Fowler took the lead to himself for the first time when Todd bogeyed No. 10 to start the back nine. Todd hit into the rough off the tee and couldn’t sink a 13-footer to save par. Todd sunk a 15-footer for birdie on No. 12, taking back the lead when Fowler two-putted from 13 feet for bogey.

Todd hit his approach 166 yards to 3 feet on No. 13 for his shortest birdie putt of the day and a two-stroke lead. But Todd found the water just short of the green on the par-3 14th and threw his hat in disgust at his shot. A bogey dropped him to 12 under.

“That’s the easiest to put on the green, to not hit in the water,” Todd said. “It was a swing that was out of rhythm that was a little bit too often today and to know I hit the water there, it made me pretty mad.”

He made up for it with a 16-foot birdie putt on the par-5 No. 16 for a two-stroke lead again. But he couldn’t get up and down from the rough off the fringe of the green on No. 17 for his fourth bogey.

DIVOTS: Todd has had at least a share of the 54-hole lead on tour five times in his career with four of those since last fall. That’s the most of any player this season. … Tom Lewis matched the course record with a 61 last shot by Bob Estes in 2001. Jay Delsing first set the record in 1993 when this course was a par 71.