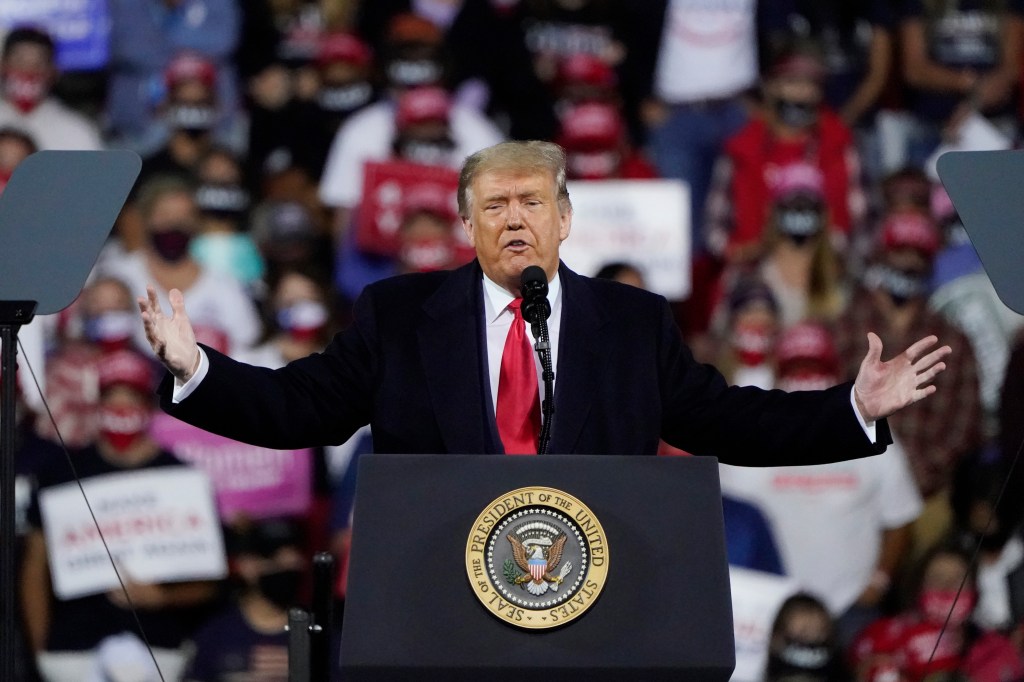 President Trump wants to move on a Supreme Court nominee “without delay” after the death of Associate Justice Ruth Bader Ginsburg — and Democrats are beginning a full-court press against him as the issue roils an already intense election.

“I will be putting forth a nominee next week,” Trump said at a North Carolina rally on Saturday, after tweeting earlier that he wants to move “without delay.”

“It will be a woman,” he said at the rally. “A very talented, very brilliant woman.”

Ginsburg, 87, died Friday night following a battle with pancreatic cancer — just a month and a half before the Nov. 3 presidential election. It was reportedly her dying wish that she not be replaced “until a new president is installed.”

The 2020 presidential race has focused primarily in recent months on Trump’s handling of the coronavirus that has killed nearly 200,000 Americans. But the death of the liberal legal icon who championed gender equality now gives Trump the rare possibility of appointing a third justice to the bench — and another conservative.

“This is the ‘October surprise’ in September,” GOP strategist Patrick Griffin told the Herald. “The fact of the matter is this will firm up both bases — it will energize both bases. The real question is how do swing voters in swing states feel about this — and that’s all that matters.”

“President Trump’s nominee will receive a vote on the floor of the United States Senate,” McConnell said in a statement.

Democrats from Joe Biden to U.S. Sen. Elizabeth Warren swiftly called to delay any nomination until after the election, with many citing that precedent.

Others, including U.S. Sen. Edward Markey and U.S. Rep. Joseph Kennedy III, called for Democrats to respond to any approval of a Trump nominee with a plan to “pack the court” and add more seats if Biden is elected and Democrats win the Senate. Those new seats presumably would be filled with more liberal judges to tip the balance of the court back leftward.

The situation puts Republican senators mired in tough re-election fights in a difficult spot. Maine U.S. Sen. Susan Collins said Saturday that it’s too close to the election to move a judge through. U.S. Sen. Lisa Murkowski of Alaska told reporters the same just hours before Ginsburg’s death was reported.

Other Republicans in the final months of elections — including U.S. Sens. Thom Tillis of North Carolina, Lindsey Graham of South Carolina, Martha McSally of Arizona and Kelly Loeffler of Georgia — indicated they could support moving through a nominee quickly.

Trump had sought to make Supreme Court picks an issue in the presidential race even before Ginsburg’s death, releasing an updated list with another 20 names just last week. Those under close consideration reportedly include three female federal appeals court judges: Amy Coney Barrett, beloved among conservatives and an early favorite; Barbara Lagoa, who is Hispanic and comes from the battleground state of Florida; and Allison Jones Rushing, who clerked for Justice Clarence Thomas and for Gorsuch, when the current Trump-appointed justice was an appeals court judge.

The president, who’s won plaudits from Republicans for filling benches with conservatives, is already fundraising for his re-election campaign off the prospect of appointing another to the nation’s highest court.

Republican strategist Ryan Williams said he expects Trump will try to make the court pick an issue in his first debate against Biden in just over a week.

But Democratic consultant Scott Ferson says the true “impact here is going to be on the Senate rather than the presidential race” — likely to the Democrats’ advantage in the upper chamber.

“This year, given the make up of the Senate seats that are in play, the fact the Democrats could take it and the fact the Senate is the key in holding the cards on who the next justice is, makes people very focused,” Ferson said.