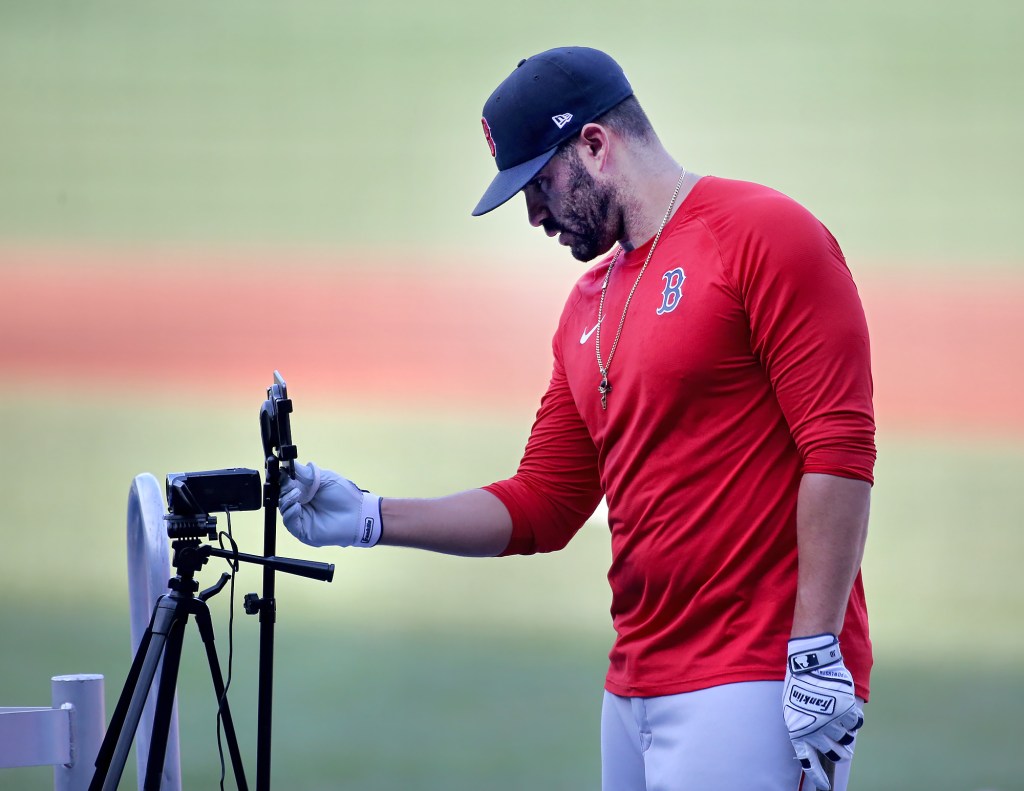 J.D. Martinez is lost, and so are the Red Sox.

That’s what happens when you trade Mookie Betts, who hit his first home run in a Dodger uniform and made a spectacular play in right field on Friday night.

When Martinez isn’t going, neither are the Sox.

“It’s awful,” he said of his swing after going 0-for-3 in their 5-1 loss to the Yankees. “Yeah, I don’t know. I’m just trying to find it really. Just grinding away, figuring it out, I’m going to try to get it.”

As Aaron Judge carried the Yanks with his third homer of the season, his seventh and eighth RBIs and a sensational throw from right to nail Kevin Pillar sneaking off first base, Martinez was coming up empty for a Sox team that needs to rely on him more than ever.

It was Martinez who hit a weak blooper into right field that Judge caught easily on the run and turned into a double play in the third inning. There were two men on, one out, and the Sox had just scored their first run of the game with a Michael Chavis blast.

That was their chance at momentum, and Martinez hit into a double play that ended the inning.

“Every time we’ve got a guy on, we kind of either double play, groundout double play, we just kind of kill the rally in some way,” he said afterwards.

The Sox are lagging behind at just 3-5 in the standings while having averaged just two runs per game since their 13-2 thrashing of the Orioles on Opening Day.

Asked about the team’s confidence level in the clubhouse, Martinez shook his head.

How could they be confident when they’re running out of pitchers and the middle of the order is hitting .219, .172 and .240 between Martinez, Rafael Devers and Xander Bogaerts, respectively?

“If we come out tomorrow and start swinging it, our confidence goes through the roof,” Martinez said. “The middle of the order isn’t producing. We’re being carried by the bottom of the order. Obviously when the heart of the order and the big sluggers aren’t going out there and driving in runs, the doubt kind of creeps in.”

Martinez is never a fast starter. March and April have been the worst months of his season often throughout his career. This isn’t the time for slow starters, he admitted.

What makes it difficult is the restrictions on the players due to the coronavirus, he said. He wants to be at the park earlier, watching video and working in the cage with his coaches.

He still hasn’t found a new routine, something that may sound trivial to the average athlete but can be everything to a hitter.

“You do want to grind on something, you can’t come in because there’s a certain amount of time you can come in,” Martinez said. “It’s tough. It’s one of those seasons you hope you have your swing right out of the chute. Because if you don’t, then it’s hard to get in early, get some work done, get on the videos, watch, because you really just don’t have it anymore.”

Hitting second has been an adjustment, too. He’s hit third and fourth most of his career in Boston.

“It’s a little different,” he said. “The whole routine changes. Obviously I don’t get as many at-bats to watch the pitcher early on. Usually I have the first two to three guys to kind of time them up a bit. That’s probably a different part about it.”

This was always going to be a team that would have to win with its bats.

Until Martinez gets going, that’s proving to be difficult.

“No doubt JD is a huge part of that lineup,” said manager Ron Roenicke. “J.D. was swinging the bat really well when we first started the season and then he got cold. When we first started he was really really good. As you know it was all good through training camp then the first couple games. Then, for whatever reason, guys get a little out of whack.

“He’s there right now. He works at it. He’ll figure it out and find it. He’s always that consistent guy you can count on so he’ll get it back.”